from the Port Lincoln on the Eyre Peninsula, seafood capital of Australia

Q. What is the story behind Pure Coffin Bay Oysters?

Chris and I were a young married couple working normal jobs as most married couples do but we had a burn to work for ourselves in our own business. We both loved the ocean and spent time boating, diving and fishing on the Eyre Peninsula. My father and my family had grown up on the sea, rock lobster fishing. And then for a short time my dad in partnership, built a tuna boat and fished for tuna from Port Lincoln. So working with seafood and on the ocean seemed like the right fit for us.

Aquaculture, especially oysters, was new and exciting back in 1996 and it was affordable for us to get a start in. We bought a lease and started farming in Streaky Bay. We hobby-farmed for the first 10 years until the business had been built to a point that we could both quit our day jobs and work full time in our own oyster farm. By this time we had sold our farm in Streaky Bay and bought into oyster farming in Coffin Bay.

Q. What’s your connection to the Eyre Peninsula?

I have lived on and off the Eyre Peninsula since I was 2 years old. Starting in Port Lincoln back in 1973 for a short time until we moved for quite a few years to a small wheat-belt town 60 km north-west of Streaky Bay called Poochera. Then after a 10 year period in the big smoke in Adelaide as a young adult, the Eyre Peninsula was enticing me to return. I moved back to Port Lincoln which is where I met and married Chris, who was posted there for work. We spent time living together for Chris’s work in Ceduna and then started oyster farming, originally in Streaky Bay but moved back to oyster farm in Coffin Bay in 2004 which is where we have been ever since.

Q. What aspects of your job do you love the most?

There is so much to love, out in nature everyday and each new day is an adventure, as we never know what nature will throw at us next. Clear blue skies and crystal clear water. Surrounded by national parks we do work in a lovely office! Sunshine warming our backs and a landscape to die for every direction that you turn. Don’t get us wrong, winter can be tough with water temperatures dropping and wind and rain to contend with, but majority of our days are fantastic so we wouldn’t trade it for anything else.

﻿Q. Why should people come to Coffin Bay?

For the world famous Coffin Bay oysters of course! Truly that is why so many of our current visitors do come to Coffin Bay. They know the name of those oysters that they eat around Australia and the world. When they have the opportunity to come and see for themselves where these amazing oysters are produced, they make sure they come and visit. Coffin Bay isn’t just known for its beautiful oysters though, but also for the beautiful large waterway, gorgeous coastline and pristine landscape. It’s remote, wild and beautiful.

Q. What can someone expect when they do your tours?

Honestly they can expect the real deal. We are truly oyster farmers running our own oyster farm. Our tour boat is our oyster punt, cleaned-up ready to impress, of course. Your host is the oyster farmer. We will show you the original oyster farm in Coffin Bay, the oyster farms of Kellidie Bay in the bay adjoining the township of Coffin Bay, and you’ll have a look around the coast line.

You will eat fresh oysters plucked straight from the water in front of your own eyes and you can purchase a local wine or beer to compliment your oysters. Coffin Bay is truly spectacular, relax on board and watch the waterway go by as you cruise along this pure coastline. Your host/farmer will tell you all about the history of oyster farming in Coffin Bay, and what’s happening now. It’s relaxed and interactive, so ask away with your questions, and you’ll have answers straight from the oyster farmer himself.

Q. What is the best way to eat an oyster? Any favourite recipes?

Natural, of course, with fresh ocean water trickling off the freshly shucked oyster meat. Lots of people do love a squeeze of fresh lemon. One of our family and friends’ favourite oyster recipe is Diablo Oysters which can be found in Out of the Blue Seafood Recipes by Michael Angelakis and Michael Keelan.

Q. What is one other thing people visiting the Eyre Peninsula should not miss?

The Coffin Bay National Park is adjacent to the township of Coffin Bay. It is a picturesque park and can be accessed by 2WD vehicle with sealed roads in many parts of the park easily accessible. You can see the open ocean, the rugged side of the park, and also the protected calm waters of the Coffin Bay waterway on the other.

For a lovely lunch or dinner overlooking the ocean and original oyster farm, ‘1802 Oyster Bar & Restaurant’ is a must for a meal or casual drink and snack. Of course if you want to finish off your education in oyster farming you can visit with us at our “The Shellar Door” for our land-based oyster shed tour, and purchase farm fresh oysters to take home.

The Eyre Peninsulars rich natural bounty is natures definition of indulgence and abundance with wildlife experiences and seafood dining of an intense, rare quality.

Combining local produce, wildlife, culture and spectacular scenery, this 3-day tour from Adelaide of Australia's Seafood Frontier will give you a real taste of Port Lincoln and the pristine regions surrounding it.

Whales at Head of Bight 3D/2N

This unique whale watching tour from Adelaide gives you the opportunity to discover the extraordinary scenery and wildlife of this part of Australia, whilst indulging in delicious local produce from Australia's Seafood Frontier.

Greg Grainger on the Eyre Peninsula

The Eyre Peninsula is a short flight from Adelaide. Meet Hassie and the crew who will take you to discover its charms.

Where To Eat On Eyre Peninsula

The small-town cafes with big-city vibes

We have the Eyre Peninsula museums for you!

The Eyre Peninsula should be just as well-known for its amazing rock formations as its beaches – they’re beautiful, ancient and perfect for exploring.

Wait, The Eyre Peninsula Has Wine ??

Okay, so we’re not famous for wine like some of our other South Australian cousins – we’re looking at you Barossa and the McLaren Vale – but that’s not to say we don’t have some nice places of our own to check out.

Art On The Eyre Peninsula - An Unexpected Treasure Trove

Maybe the Eyre Peninsula hasn’t figured in your mind as a destination for art and culture – so this blog is to enlighten you!

Whale Watching at Head of Bight 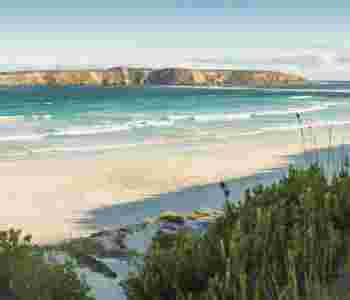