The Fantastic Story of the Huon Pine

The tree on which a thriving shipping industry was built

About 80 million years ago, southern conifers were growing in Tasmania and the land mass was still just connected to the Antarctic. The Huon Pine, a descendant of these early conifers, still grows in Tasmania today and played a pivotal role in the industrialisation of the region’s trade routes. It can be argued, the tree was a crucial resource, necessary for creating a newfound prosperity, on which the entire economy was built, including thriving apple production in the Huon Valley.

Huon Pine was a perfect timber for building the ships that plied up and down the river, an important highway linking the timber-rich south with Hobart and beyond. The pine contains natural, aromatic oils, that waterproof and preserve the timber against rot, even when submerged in fresh or sea water. Famous for being lightweight, durable and extremely craft-worthy, “piners” would risk life and limb to navigate the most inaccessible stretches of river, for this valuable resource. But they take centuries to grow. The oldest known trees have been dated around 4,000 years but there is a stand on Mt Read in northern Tasmania that’s existed as a clonal colony for over 10,000 years. All the trees are descended from one individual.

Being slightly denser than water, not all the stock-piles of extracted Huon made it to the timber mills. Some were lost to the bottom of lake-beds. Others were naturally washed from river-banks and lake-sides in hundred-year floods and there they have remained perfectly-preserved, until now. Still being among the most highly prized boat-building material, in recent years, a new industry has formed to refloat 2,000 year old logs and supply Huon Valley shipyards.

Here, not just a landscape but a tree, has helped shape and continues to define a region’s economy and culture. The forested hills, tannin-stained river waters and the Huon Pine - even long-since dead remants, remain an influence on its culture and people.

FAQs about Travel to Tasmania

Top questions about travel to Tasmania

Overseas travel just a skip from home has become rather desirable of late. This pocket-sized Bass Strait wonder perched off Tassie’s NE tip packs adventure, flavour and stunning scenes into an island home to about 1000 locals.

Fanging through an obstacle course of thick ferns, jagged granite and towering gums is one way to learn the art of mountain biking – fast – at a Tasmanian retreat.

Danika Porter explores the raw nosh of Tasmania’s Bruny Island, in a balancing act of the senses, and the waistline.

A self-drive delight in Northern Tasmania

The Story of Frank's Cider

5th and 6th generation cider makers in the Huon Valley 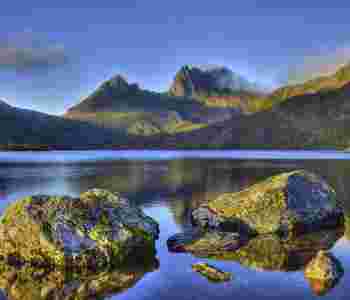